Skip to content
Engelman Berger, PC > EB News > Uncategorized > Engelman Berger to be a Sponsor of the 2018 ADL Torch of Liberty Award Dinner 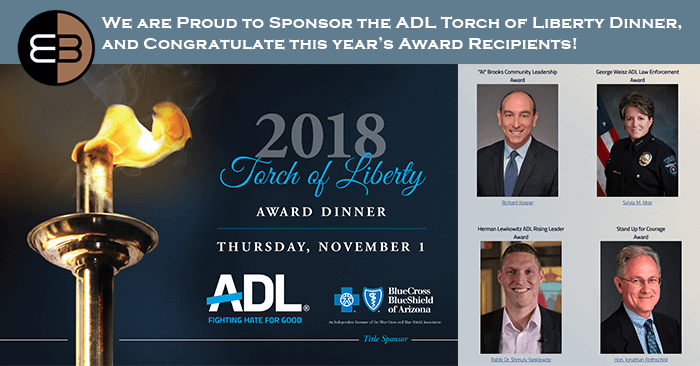 On November 1, 2018, Engelman Berger will be a sponsor of the 2018 Anti-Defamation League (ADL) Torch of Liberty Award Dinner in which two of our attorneys, 2017 ADL “Al” Brooks Community Leadership Award Recipient Steven Berger and current member of the ADL Phoenix Board of Directors Bradley Pack, will be in attendance. The event will be hosted at the Omni Scottsdale Resort & Spa at Montelucia from 6PM to 9PM.

This year, ADL will be honoring Arizona Public Service (APS). APS has paired with ADL to work against bigotry, discrimination and hate in all forms.

ADL’s Regional office in Phoenix, Arizona is one of the youngest in ADL. Long before its establishment in 1983, many of the same people who launched the Phoenix office were involved in a successful, national high-profile fight to eradicate the long-standing restrictions again Jews that were still observed by many of Arizona’s finest resorts. Today, the ADL Arizona Regional Board and the office regional staff represent one of the premier civil rights/human relations organizations in the state. The ADL provides an ongoing counter to bigotry, discrimination and hate of all forms, against any and all groups.

We look forward to being a sponsor of this important event, particularly at a time when our hearts and prayers go out to the families and community impacted by the shooting at the Tree of Life Congregation Synagogue in Pittsburg, Pennsylvania.