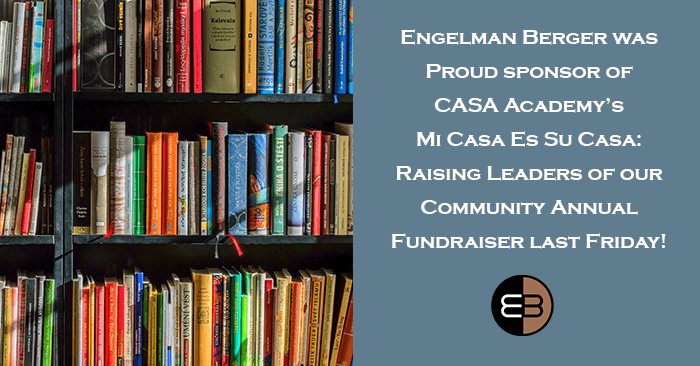 On Friday, February 22, the CASA Academy hosted their annual fundraiser, Mi Casa es su Casa: Raising Leaders of our Community. Engelman Berger was a proud sponsor of this 250-person event that featured appetizers and desserts, beer and wine, live entertainment and testimonials from CASA Academy staff and scholars. The donations raised by the event directly benefit the 175-low-income youth that CASA Academy strives to help and serve.

CASA Academy, an acronym for College, Achievement, Social Responsibility, and Authenticity, is a school that provides low-income students with the necessary early academic foundation and character skills that are necessary to graduate from college and further succeed in life. CASA Academy prides itself on its effort to raise the bar for education in Phoenix and benefit students within the area. A unique aspect of CASA Academy is that it starts the road to college in kindergarten. Rigorous curriculum is taught from the first day of school and from there on. CASA Academy originated in 2012 when Jenna Leahy and Tacey Clayton connected over the multiple injustices they had witnessed in their classroom: low-income students were not progressing or advancing at the level and rate as high-income students. They joined forces, worked hard to raise $950,000 in start-up funding, visited many top performing schools and took note of various tools and learning practices, and submitted their charter application in 2014 which was then approved. CASA Academy has been positively impacting underserved students ever since.

We hope everyone who attended had a wonderful time supporting this inspirational and life-changing organization!