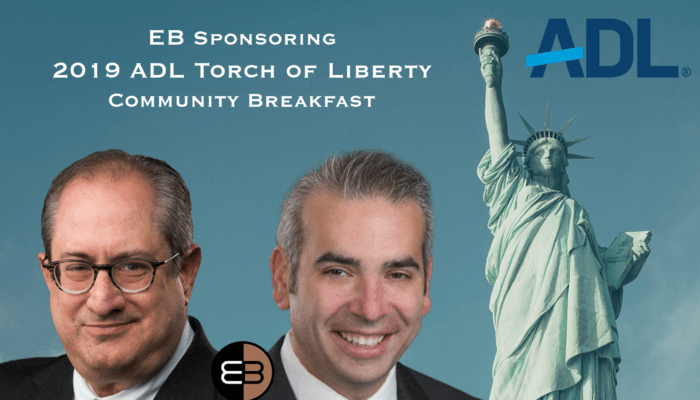 The Anti-Defamation League-Arizona is hosting their annual 2019 Torch of Liberty Community Breakfast on November 22, 2019 at the Omni Scottsdale Resort & Spa at Montelucia. At this year’s event, ADL will honor Ahron Cohen, president and CEO and Alternate Governor for the Arizona Coyotes Hokey Club, with the 2019 Torch of Liberty Award. ADL will also Honor Rabbi Elana Kanter of the New Shul with the Al Brooks Community Leadership Award, Ryan Green of the Maricopa County Attorney’s office with the ADL George Weisz Law Enforcement Award, and Chris Camacho, President and CEO of the Greater Phoenix Economic Council, with the ADL Herman Lewkowitz Emerging Leader Award. For more information and event details, visit this link, https://arizona.adl.org/event/torch-of-liberty-community-breakfast-2019/.

EB attorney, Bradley Pack, is an active member of ADL Arizona’s Board of Directors, and currently serves as Chairman of its Government Relations Advocacy and Community Engagement Chair (GRACE) committee. EB attorney and founder, Steve Berger, served two periods on the ADL Board of Directors and has been a supporter of the organization since the early 1980’s.

The ADL’s Arizona Regional office in Phoenix is one of the youngest in ADL, having been established in 1983. Long before that, however, many of the same people who launched the ADL office here were involved in a successful, nationally high-profile fight to eradicate the long-standing restrictions against Jews that were observed by many of Arizona’s finest resorts. Today, the Arizona Regional Board, led by Board Chair Donna Johnson, and the office regional staff led by Regional Director Carlos Galindo-Elvira, represent one of the premier civil rights/human relations organizations in the state and provide an ongoing and dynamic counter to bigotry, discrimination and hate in all forms, against any and all groups.