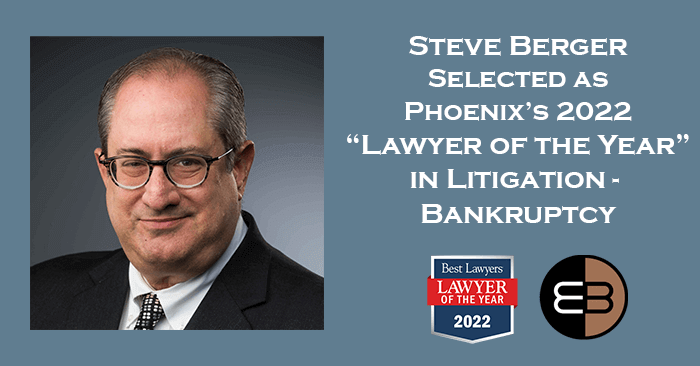 Engelman Berger, PC attorney Steven N. Berger was recently recognized by Best Lawyers® as the 2022 “Lawyer of the Year” for Litigation – Bankruptcy.

Only a single lawyer in each practice area and designated metropolitan area is honored as the “Lawyer of the Year,” making this accolade particularly significant. These lawyers are selected based on particularly impressive voting averages received during the peer review assessments. Receiving this designation reflects the high level of respect Steve has earned among other leading lawyers in the same communities and the same practice areas for their abilities, professionalism, and integrity.

In addition to the “Lawyer of the Year” award, Steven N. Berger was also listed in the 2022 edition of The Best Lawyers in America® in Bankruptcy and Creditor Rights / Insolvency and Reorganization Law. Since it was first published in 1983, Best Lawyers has become universally regarded as the definitive guide to legal excellence. 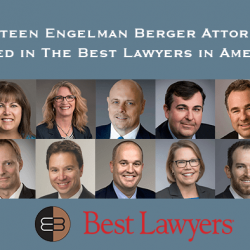 Fourteen of Engelman Berger’s attorneys have been selected for inclusion in The Best Lawyers in America© 2022, considered by many to be the definitive guide to legal excellence. EB attorneys were chosen in the areas of Bankruptcy, Litigation, Commercial Litigation, Creditor Debtor Rights, Insolvency and Reorganization Law, Appellate Practice, Public Finance Law, Water Law, Banking and Finance Law, Health Care Law, and Real Estate Law. EB would like to congratulate Rachel Phillips for being our newest addition to the Best Lawyers list!

The Best Lawyers in America: Ones to Watch 2022:

Best Lawyers® is the oldest and most respected peer review publication in the legal profession. Best Lawyers® selects its honored attorneys entirely by peer review. Their methodology is designed to gather as accurate of a consensus opinion of the leading attorneys in the profession. Selections are made after compiling data from extensive peer review surveys in which tens of thousands of leading lawyers confidentially review and evaluate their professional peers. Opinions are based on the lawyers’ professional abilities which are compared to others in the same geographical location and legal practice area. Congratulations Steve, Brigitte, Tami, Kurt, Patrick, Scott, Brad, Bill, Wade, Kevin, Damien, Julie, Rachel, and Michael! 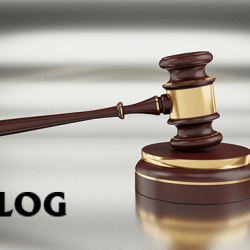