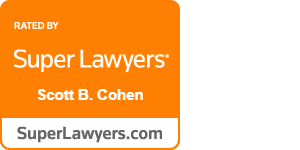 Admitted to practice before all state and federal courts in Arizona and California and before the U.S. Court of Appeals for the Ninth Circuit.

Scott B. Cohen is a Phoenix based commercial bankruptcy attorney who represents banks, lenders, landlords, guarantors, committees, and other creditors in bankruptcy, creditors’ rights matters, loan workouts, business turnarounds, Chapter 11 reorganizations, receiverships, bankruptcy litigation, and commercial litigation. He regularly appears in U.S. Bankruptcy Court and state court proceedings involving liquidations, Chapter 11 reorganizations, receiverships, and commercial lawsuits. Scott is a leading member of Arizona’s bankruptcy law community, as exemplified by his chairmanship (2011-2012) of the Bankruptcy Section of the State Bar of Arizona. He is a Certified Specialist in Business Bankruptcy (American Board of Certification) and also serves as an expert witness in bankruptcy and anti-deficiency matters.

To provide spirited and focused representation of commercial lenders, creditor clients, and financially distressed businesses in achieving negotiated and litigated solutions in bankruptcy and other commercial insolvency matters.

American Board of Certification, Board Member

Bankruptcy Section of the Maricopa County Bar Association, Past Chair

Recognized in The Best Lawyers in America© in Phoenix, AZ, in the fields of Bankruptcy and Creditor Debtor Rights/Insolvency and Reorganization Law, since 2020; and Litigation – Bankruptcy, since 2021

Board Certified – Business Bankruptcy Law – American Board of Certification

Typical of Scott’s legal engagements are his representation of:

A regional hospital and other out-of-network providers in an involuntary bankruptcy of a third party administrator plan that was wholly owned by another regional hospital, through which Scott worked with his client in the client’s role as chair of the Unsecured Creditors’ Committee to collaborate with debtor’s counsel to confirm a full-payment, Chapter 11 reorganization plan.

A REIT in the Chapter 11 reorganization of a publicly traded private school involving multiple locations and a buyback by the parents.

In addition, Scott has Served as:

Counsel to the Arizona Bankers Association.

An Unsecured Creditors’ Committee in a currency exchange bankruptcy case involving fraud allegations against the debtor and against a large European bank.

Lead bankruptcy trial counsel on the successful reorganization of an operating company with obligations of approximately $40 million.

Lead bankruptcy trial counsel on the successful reorganization of 150 unit affordable housing project, resulting in a confirmed Chapter 11 plan of reorganization with a 40 year straight amortization and a 4.4% interest rate on the secured debt.

Lead bankruptcy trial counsel in six involuntary bankruptcy cases, representing petitioners in some cases and putative debtors in others.

“Why Become an American Board of Certification (ABC) Member” ABI Journal, April 2020

“An Armistice in the Fight for Anti-Deficiency Reform,” Co-Author, Arizona Attorney Magazine, January 2015

“Zohlman v. Zoldan: A Marked Improvement in the Jurisprudence of 11 U.S.C. Section 523(a)(4),” Co-Authored, published in Bankruptcy Court Decisions

“Arizona Anti-Deficiency Laws: A Guide to Navigating Uncertainty,” Co-Author, May 2008

American Jewish Committee, Past Board Member

Council for Jews with Special Needs, Past Board Member